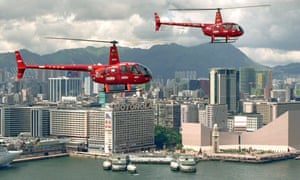 All is calm. All is still. Share prices are going up. Oil prices are rising. China has stabilised. The eurozone is over the worst. After a panicky start to 2016, investors have decided that things aren’t so bad after all.

Put your ear to the ground though, and it is possible to hear the blades whirring. Far away, preparations are being made for helicopter drops of money onto the global economy. With due honour to one of Humphrey Bogart’s many great lines from Casablanca: “Maybe not today, maybe not tomorrow but soon.”

Helicopter money is closer than you think

But isn’t it true that action by Beijing has boosted activity in China, helping to push oil prices back above $40 a barrel? Has Mario Draghi not announced a fresh stimulus package from the European Central Bank designed to remove the threat of deflation? Are hundreds of thousands of jobs not being created in the US each month?

In each case, the answer is yes. China’s economy appears to have bottomed out. Fears of a $20 oil price have receded. Prices have stopped falling in the eurozone. Employment growth has continued in the US. The International Monetary Fund is forecasting growth in the global economy of just over 3% this year – nothing spectacular, but not a disaster either.

Don’t be fooled. China’s growth is the result of a surge in investment and the strongest credit growth in almost two years. There has been a return to a model that burdened the country with excess manufacturing capacity, a property bubble and a rising number of non-performing loans. The economy has been stabilised, but at a cost.

The upward trend in oil prices also looks brittle. The fundamentals of the market – supply continues to exceed demand – have not changed.

Then there’s the US. Here there are two problems – one glaringly apparent, the other lurking in the shadows. The overt weakness is that real incomes continue to be squeezed, despite the fall in unemployment. Americans are finding that wages are barely keeping pace with prices, and that the amount left over for discretionary spending is being eaten into by higher rents and medical bills.

For a while, consumer spending was kept going because rock-bottom interest rates allowed auto dealers to offer tempting terms to those of limited means wanting to buy a new car or truck. In an echo of the subprime real estate crisis,vehicle sales are now falling.

The hidden problem has been highlighted by Andrew Lapthorne of the French bank Société Générale. Companies have exploited the Federal Reserve’s low interest-rate regime to load up on debt they don’t actually need.

“The proceeds of this debt raising are then largely reinvested back into the equity market via M&A or share buybacks in an attempt to boost share prices in the absence of actual demand,” Lapthorne says. “The effect on US non-financial balance sheets is now starting to look devastating.”

He adds that the trigger for a US corporate debt crisis would be falling share prices, something that might easily be caused by the Fed increasing interest rates. .

So that’s China and the US. How are the other two members of the “big four” – the eurozone and Japan – faring? The answer is not so well.

Europe’s big problem, over and above the fact that the euro was a disastrously flawed concept, is that the banking system is not fit for purpose. As the IMF noted last week, a third of eurozone banks have no prospect of being profitable without urgent and meaningful reform. That requires two things: to reduce the number of banks and to do something about the €900bn (£715bn) of bad loans sitting on their books at the end of 2014.

There is no immediate prospect of either happening, which makes it much harder for Draghi to get any traction with his stimulus package. The plan is that negative interest rates and quantitative easing will increase the incentives for eurozone commercial banks to lend more. The banking system, however, is badly impaired and the normal channels for creating credit are blocked.

The same applies to Japan, where the financial markets have responded badly to the announcement of negative interest rates earlier this year. As in Europe, the idea was that the banks would lend more if they were penalised by negative interest rates for hoarding money. Higher lending would lead to higher levels of investment and consumption, which would in turn feed through into higher prices.

The plan has not worked. There has been little impact on interest rates, banks have not increased their lending and the yen has risen on the foreign exchanges – the opposite of what was planned – because investors fear that the Bank of Japan is fast running out of ammunition. They have a point.

Central banks, of course, swear blind that they are fully in control and that there is nothing to worry about. Perhaps not, but something doesn’t smell right. The fact that economists at Deutsche Bank published a helpful cut-out-and-keep guide to helicopter money last week is a straw in the wind.

As the Deutsche research makes clear, the most basic variant of helicopter money involves a central bank creating money so that it can be handed to the finance ministry to spend on tax cuts or higher public spending. There are two differences with QE. The cash goes directly to firms and individuals rather than being channeled through banks, and there is no intention of the central bank ever getting it back.

It will take some time to get the helicopters into the air. Central banks can muddle through for the rest of this year, beefing up their QE programmes and driving interest rates deeper into negative territory. The underlying softness of the global economy, however, means that it is quite easy to envisage a downturn in 2017, the 10th anniversary of the start of the financial crisis.

In those circumstances, the unconventional would quickly become conventional, as it did after the collapse of Lehman Brothers. The only question would be which central bank would move first. Hardline resistance from Germany means it certainly would not be the ECB, although the case for helicopter money in the eurozone is strong.

Instead, it would be a toss up between the Fed, which is normally prepared to experiment with something different if the situation is desperate enough, or the Bank of Japan, where – as the Deutsche research reminds us – helicopter money was used successfully in the 1930s to help the country escape the Great Depression with far less damage than to other western nations. So give it a few months then listen hard. The choppers are coming.